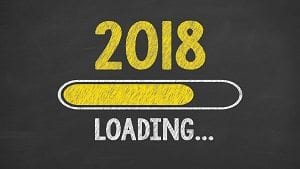 It’s that time of year again when we look back at the year that was in order gain insight about what to expect for the incoming new year.  There is no doubt that 2018 will bring many challenges when it comes to cyber security. As netizens continue to utilize an ever-expanding array of devices to access the digital world, all the while, hackers grow more adapt at conducting their malicious activities to compromise users’ safety and security.  As a result, it is safe to say that VPNs will continue to grow in popularity, spawning growth and added opportunities for VPN providers.  Below are some of the trends and predictions we see as relevant for the coming year.

The Most Influential Cyber Security Trends of 2018

The EU GDPR was a hot topic in 2017, and rightly so, as it becomes law in May of 2018.  There is no doubt that organizations will be scrambling to adapt and implement the necessary processes and procedures to meet the new set of enforced compliance regulations.  The purpose of GDPR is to provide a level of conformity to data privacy laws for personal data connected to European citizens.  Naturally, those organizations located within one of the 28 EU states must comply with the new strict standards.

However, even if you are located outside of the EU, you may be subject to this new set of compliance regulations as well.  That is because GDPR is not directed at companies but at the data and information of EU citizens at large.  This means that any organization that stores or processes information belonging to EU citizens falls under its jurisdiction – regardless of geographic location.  This would apply to managed service providers as well.  In other words, if you or your clients do business with Europe, you most likely fall under GDPR.  Under GDPR, personal data includes:

The process of encrypting data both in transit and in storage will play a big part in meeting GDPR compliance.

If you have ever traveled, you know how critical it is to communicate digitally with the outside world.  You also likely know how frustrating it can be to access a working VPN solution. For example, China has regularly, without officially announcement, brought down designated VPN solutions in the past.  On February 1, China will exponentially expand its battle against VPN usage by enforcing new regulations that require telecommunications carriers to block users’ access to private, government unapproved VPNs.  This of course will cut off access to social media and the global internet.  Companies operating within Chinese borders will still be allowed to employ leased lines to access the World Wide Web but must register their usage of such services.

This is not the first time a major power has enacted VPN legislation. Russian President Vladimir Putin signed legislation prohibiting the use of technology, including VPN that provides access to websites banned in the country.  Up to now, Russian and China have attempted to control VPN technologies using technology solutions.  Only time will tell whether these governments will be able to combat VPN through expansive legislation efforts.

Bitcoin and its Hacking Influence

With the explosive returns that many have boasted concerning their purchase of the much-publicized cryptocurrency, bitcoin was a hot topic in 2017.  Once a secret currency of the dark web, bitcoin is now becoming a mainstay topic of financial news and conversation.  The sudden spike in bitcoin has also affected the behavior of cybercriminals as well.  As bitcoin is the preferred currency of ransomware, extortion demands for ransomware attacks has risen right along with bitcoin prices.

June 2017 saw the first ever $1 million ransom paid by a Korean web hosting company hit by the Erebus attack. That same month, a Canadian firm was forced to pay a ransom of $425,000.  Though escalating ransom demands may not be entirely attributed to the price surge of digital currencies, cyber security vendors and insurance companies are confirming that ransomware payouts have increased since bitcoin took off.  In addition, cryptocurrency mining malware is becoming a growing problem as unscrupulous cryptocurrency miners are hijacking ordinary users’ web sessions to utilize the processing power of their devices.  Starbucks was recently forced to deal with this problem within their own stores, a fact that emphasizes the importance of utilizing VPN when connecting to public hot spots.

The Internet of Things Expands Exponentially

A year ago, Gartner forecasted that the number of global IoT devices would reach 8.4 billion by the end of 2017.  Considering the fact that IoT devices were the hot gifts this past holiday season, there is no surprise that, for example, eBay reported that their  sales for IoT and smart home devices were at their highest ever.  The unprecedented growth in IoT emphasizes the importance of securing these devices as well.  IoT devices do not have the internal resources to protect themselves to the degree that normal endpoint devices do.

In addition, many organizations and individuals are lackadaisical in keeping these devices patched and up to date.  This makes them easy targets for hackers and cyber criminals.  Besides providing a less inhibitive gateway into an enterprise, they provide hackers with the ability to create botnets and achieve incredible levels of scalability for their attacks.  IoT bots are highly utilized for both DDoS and credential stuffing attacks.

In addition to the challenges listed above, one can assume that users will spend even more time on their computing devices in 2018.  In the ubiquitous digital world of today in which users can access the wired world from an endless number of public hotspots, a VPN subscription just makes sense.  It is the one tool that can serve as your last line of defense to a growing number of threats in the year ahead, some of which we don’t aren’t even aware of as of yet.

A VPN service such as Express VPN, Hotspot Shield, or NordVPN can help protect you regardless of the access environment you connect to.  What’s more, a VPN gives you peace of mind knowing that your data and usage are protected, shielded and secured for all of your devices. We’re willing to bet that 2018 could be the biggest year for VPN yet.